I was once in the business of landscaping having co-managed a firm in New Hampshire and now am on the equipment side of the green industry and it absolutely amazes me how equipment innovation has changed the way landscape construction and maintenance companies do business today.

The mini excavator was first introduced in 1971 but never became popular until the late 90’s. I think it was a realization that the alternative was not working. It seems now that most landscapers involved in construction employ one of these units. Some may rent, some may own, but not many use the alternative and if they do they are finding it more and more difficult to be competitive. I can remember not so long ago using the alternative myself; a backhoe attachment for the front of a skid steer. It certainly did the job but it was so heavy on the front of the unit that you really couldn’t realize full utility of its lifting capacity. If the dirt was wet or rocky, even with the stabilizers down, you were playing the tipping game. The other drawback was moving the unit. Okay, this hole is deep enough lets move on to the next. 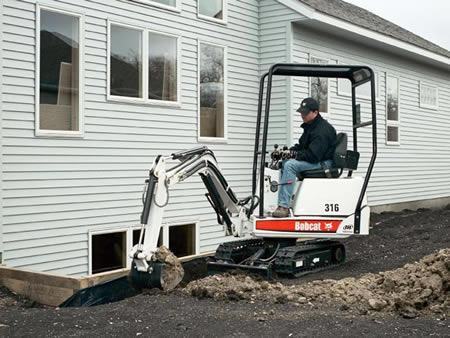 First, get out of the seat and somehow finagle your body back around and into the cab (as long as the attachment is angled so that the door will open). Put your seat belt on or the safety locks will remain engaged and you won’t be able to move. Oh damn, I left the stabilizers down. Unbuckle, climb back up around the door and onto the seat and lift the stabilizers up. Okay, back in the machine, buckle up, now we’re moving forward to the next hole. What a process this was. Of course some guys would send an additional guy to the jobsite in order to eliminate this “wasted time”. Efficiency experts I guess. The other major drawback of this set up was that the huge lack of floatation to the wheels coupled with the added weight of the attachment created more of a mess to the surrounding areas than you bargained for. The mini excavator is much more stable, easy to operate, is much more versatile and doesn’t make a huge mess. I’ve seen these units dig upwards of 20 holes in a tight area in short of an hour with very little mess and the operator never having left the cab. The mini-excavator…….. a great innovation indeed.

Believe it or not the first hydroseeding machines were invented in 1953! Many people think that the hydroseeder is new technology. Although some newer units are capable of sending slurry 300’ through the atmosphere in two directions, the goal remains the same as it did in the beginning; to establish top quality turf and control erosion in a timely manner. Before 1980 the hydroseeder would broadcast, seed and fertilizer only, over a measured area and then was covered by hay or straw to aid in moisture retention. Today, although hay and straw are still used in some applications, a product widely known as fiber mulch is used in its place and mixed into the tank with seed and fertilizer making hydroseeding a one-step process. The fiber mulches are typically made up of processed wood and/or paper blends that control moisture and erosion, while not introducing foreign weeds to the area like hay does.

Hydroseeding equipment didn’t become widely popular until the late eighties with most landscape companies. There were some that employed the equipment but often enough it was their specialty not just an added service. Most landscapers were pushing around a wheeled seed spreader to spread seed and fertilizer. They would then hand shake some hay or straw over the top to aid in moisture retention. If the customer wanted instant lawn and was willing to dip into their pockets a little deeper, the landscaper supplied and installed sod (about three to four times the cost of hydroseeding and very labor intensive). Today, most landscapers that provide an array of services, either own a hydroseeder, rent a hydroseeder or hire someone with a hydroseeder to establish turf. The hydroseeder…….. a great innovation indeed.

Does anyone remember the square shovel that was used to edge beds? Of course you do, some of you may still use them, although I suspect not many. The square shovel was pointed inward toward the bed and pushed with the heel of your boot creating a slicing effect. After a few new pair of boots, callused hands and a lot of time, your beds were all edged. The mechanical bed edger is somewhat different. The following is a quote from a landscaper here in New England: “I bought mine from a local dealer, but demoed it first. When he got one in for me to demo, he said "I can never keep these things around, because as soon as someone takes one out to demo, they end up keeping it." I heard that and thought ‘yeah, you just keep pitchin’, sales man.’ But, sure enough, we demoed it on a day where we were going to have to dig about 300′ for new edging in clay soils. 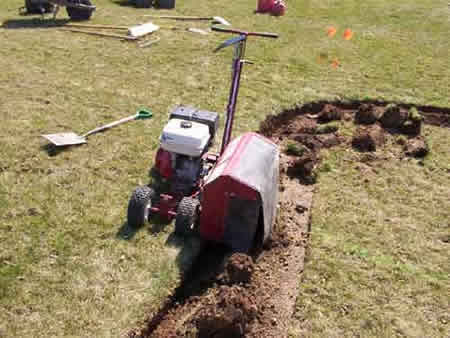 I tested man against machine to see which would be quicker. After about 90 seconds it was clear that man would not keep up with this machine. The salesman was right – I called him and said "Bill me. I’m keeping it." I don’t think I’ve seen anyone who edges a considerable amount of planting beds edging any other way and realizing any efficiency at the same time when compared to a mechanical edger. Some say its up to ten times faster and the quality of the edge is far superior to anything that can be cut with a shovel, bar none. The mechanical bed edger…… a great innovation indeed.

Many of you continue to spread mulch by hand day in and day out without realization of this amazing equipment. I’ve heard the same story from many people; "I only mulch in the spring, it would only be used for six weeks in the spring and its too much money to spend to be able to use it for six short weeks." Well, lets change that way of thinking just for a minute. Lets assume that ABC Landscaping spreads about 1000 cubic yards of mulch in a six week period. In order to accomplish that, by industry averages, he will need at least four workers, five days a week, eight hours a day. This equates to 960 man hours. Lets assume that each man is paid $12.00 per hour. This equates to $11,520.00 in labor cost alone. If ABC owned a small bark blower they would have completed the work in 360 man hours (industry average) which equates to $4,320.00. A difference of $7,200.00 in labor cost alone. 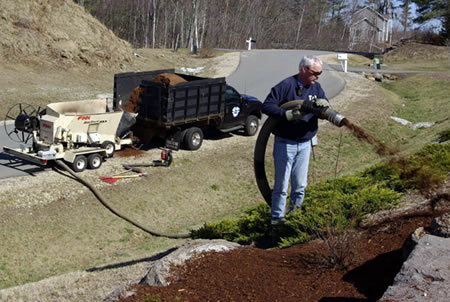 In addition, the industry suggests upwards of 30% savings in material due to the bark blowers pneumatic distribution. At $25.00 per cubic yard this savings equates to another $7,500.00 for a total of $14,700.00. Another aspect is the money saved on labor from the 300 cubic yards you’d no longer be spreading! In todays competitive marketplace, the bark blower is the way of the future for landscape maintenance. What could you do with an extra three weeks in the spring? More mulch? More hardscapes? Whether you rent a unit or buy a unit, give it a try, you won’t be disappointed. The bark blower…… the greatest innovation of them all.

To look back in time and think of the work that was once accomplished with a plentiful workforce and sore backs is astonishing. Having been one with a sore back is even more astonishing. Equipment innovation in todays world of decreased labor forces and more challenging worksites has been a saving grace for many of us.