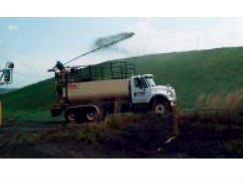 When looking for the best place to build a large substation, Alabama Power Co. needed a location that was cost effective when considering the total cost of preparing the site, building the substation and building the transmission line connections to the substation.

The chosen site met the desired criteria, but presented major challenges from a site preparation standpoint. The site was on a steep hill that had to be cut down to provide the square footage needed for the substation. The company quickly realized that erosion was a major concern. Due to the large excavation requirements for the job, eroded soil from the construction site could easily block the single access road leading up to the substation if a solution was not found. There was a large amount of dirt at a high elevation that needed to be moved to achieve the goal, so sediment runoff into nearby Bassett Creek, the winding waterway along the substation, also was a concern.

"Building this substation was a large job for us," said Michael Jones, supervisor of contractors and inspectors for Alabama Power. "We are used to installing small substations, so we knew we had to get a contractor to complete the project on schedule while also keeping environmental regulations in mind."

The Switch to Spray

When the project began in early summer 2012, Alabama Power planned on using erosion control blankets to protect the slopes.

Before construction began near Bassett Creek, multiple channels and ditches were already lined with a rolled erosion control product (RECP) solution. The RECPs aid in stabilization of concentrated flows and drainage areas during large storm events.

" While erosion control blankets are best utilized where there is a constant or concentrated flow of water such as a ditch or channel, they present many problems when used on a slope," said Jesse Putman, project manager of Putman Erosion Control. "They are more labor intensive, do not adhere to the soil well and can mask other problems such as eroded topsoil and lack of seed germination."

Hydraulic erosion control products are applied as a slurry and engineered to reduce soil erosion while assisting in the establishment and growth of vegetation.

Alabama Power utilized the product on a section of slope along the roadway and shortly thereafter, the application was put to the challenge. Four inches of heavy rain fell within an hour. After the rain, the slopes protected with the HECP had no topsoil loss, but the toe of the slope, where it had not been used, had eroded 2 ft.

After seeing that the heavy rain did not affect the slope where the product was used, Alabama Power decided the HECP was its best option for the project and used Tensar?s product to cover more than 10 acres.

"Hydroseeding has additional advantages for the region," Jones said."Because Alabama has limited watering facilities, hydroseeding establishes better erosion control with less watering compared with other methods. Planting grass seeds along steep banks will typically not hold, because the rain washes them away. The product holds the seeds in place to get the grass started, and that was very important on this project because of the steep slopes."

HydraCX Extreme Slope Matrix is a blend of straw, reclaimed cotton plant material, tackifiers and binders. When mixed with water and grass seeds, the mixture is sprayed on to the slopes with a hydroseeding machine. The spray creates a natural green blanket that makes intimate contact with the ground. This creates a sun barrier, keeping the soil moist to aid in seed germination.

"Using the HydraMax Systems" line of products, contractors have reported they can cover 2 to 3 acres per day, compared with an acre a day with traditional erosion control blankets, meaning less labor cost and better project schedule management," Putman said.

Erosion control blankets have to have complete contact with the soil for full effectiveness. Any unevenness in the soil (e.g., sticks, rocks or dozer tracking) that separates the blanket from the soil is an opportunity for water to get underneath the blanket and erode the slope.

The two biggest challenges for this project were labor costs and staying on schedule due to unforeseen weather complications. Because the process of distributing the product is not labor intensive, a four-man team was able to complete the project at a fraction of what it would have cost to use erosion control blankets.

Heavy rain was a constant struggle during construction of the project. With part of the team preparing the soil, one man would place the topsoil and another would spray the erosion control product. This process increased project efficiency and allowed the team to finish the job on schedule, even with heavy seasonal rains.

Heavy rains also brought concerns about keeping sediment out of Bassett Creek. Even with 4 in. of rain in one hour, the creek stayed clean because of the selection of proper erosion control and sediment prevention measures.

The project was completed in August 2012, and today the slopes around the Alabama Power project are lush, with grass growing waist high.

"We are very pleased with the results from both the contractor and Tensar’s HydraCX,? Jones said. "They both did a great job."

Luke Richardson is regional manager, southeast erosion control, for Tensar Intl. Richardson can be reached at lrichardson@tensarcorp.com or 205.540.5775.