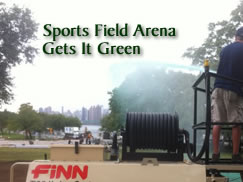 The Randall’s Island Park Alliance and the NYS Parks and Recreation Department completed the construction of over 60 athletic fields, the most athletic fields of any New York City Park and a new driving range. 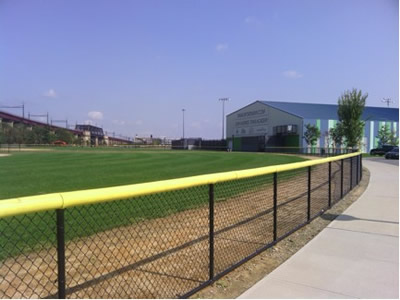 In May of 2010 the Randall’s Island Park Alliance and the NYS Parks and Recreation Department completed the construction of over 60 athletic fields, the most athletic fields of any New York City Park and a new driving range. The added fields offer a greater variety of sports, including football, lacrosse, field hockey, soccer, baseball and softball. Randalls Island Park is also host to Icahn Stadium that has hosted such world class events as Cirque du Soleil, summer concert series hosting the Electric Zoo, Dave Matthews Band, and the Governors Ball. 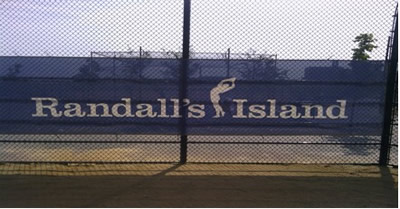 The large amount of foot traffic on the island has proven to be very stressful on the turf and landscape of the Park. When turf manager Debbie Unger needed a solution to keep things green and prevent erosion she decided to consider the purchase of a hydroseeder to help maintain the properties. hydrograsscorp.com, Finn representative and distributor in New York, brought in a Finn T60 hydroseeder for demonstration which ultimately was purchased by Randalls. Debbie knew Finn was her first choice because it wouldn’t limit the types of material she could spray. Her biggest challenge was, and continues to be, the lack of growing time between events. In many cases she has only days not weeks to get things green again. One of her solutions is to aerate and lightly scarify the trodden, muddy areas and to spray on a slurry that will give the "green appearance", will help prevent erosion, and reduce further damage.

As you can see from the before and after pictures, the slurry sprayed, consisting of Finn Corporations Tru-Wood Fiber Mulch, a turf blend grass seed mixture, tackifier and fertilizer provided excellent protection for the problem areas which eventually were able to successfully vegetate.

Going forward Debbie and her team are excited to have a new tool to help keep Randall’s Island Park looking great. With more than 256 acres and sixty sports fields to maintain it sounds like Debbie and her new Finn Hydroseeder will stay very busy. If you are ever in the area stop by and visit this wonderful place for yourself. For more information about Randalls Park Island visit them online @ www.randallsisland.org. 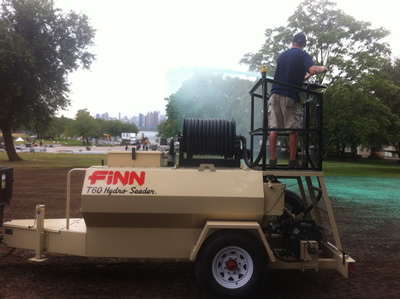